Nearly a century ago, on the 11th hour of the 11th day of the 11th month 1918, an armistice was signed by the Allies and Axis. This brought an end to the horrific conflict of World War One. From this day forth we have gathered together to remember all those lost at war on Remembrance Sunday.

As the pipe band started a gentle drizzle of rain began to fall and the traditional Scottish wind picked up. As if mimicking the mood below, the sky was covered with a quilt of grey clouds, flooding Selkirk in monochromatic light.

Each year, come hail or high water, the people of Selkirk come together on Remembrance Sunday to commemorate the lives of those lost at war. As tradition dictates, a parade of many different groups of people – ranging from ex-soldiers to guides – marched through the autumnal streets of Selkirk. Among this group were many of the High School’s students in groups such as the cadets, the scouts and the guides. However, the high school was represented in person by head boy and head girl, Josh and Jo. They joined the many wreath bearers this year, placing a commemorative wreath at the foot of the war memorial.

United in remembrance the town stood in silence, heads bowed, in recognition of those those who have sacrificed their lives so that we can carry on living ours. After the lone and haunting sound of the Last Post ushered an end to the silence, proceeding were brought to a close with a  prayer offered by the Parish Minister, the Reverend Margaret Steele.

Each and every person, young and old, was wearing a poppy. Selkirk High School has supported the Scottish Poppy Appeal each year with great success and this year made no exception. Poppies were sold around the school and support was vast with many of the school’s students offering their donations and donning their poppies.

Lest we forget those who have lost their lives fighting for our freedom, for peace and for safety. Let us remember them forever, never overlooking their great sacrifice. 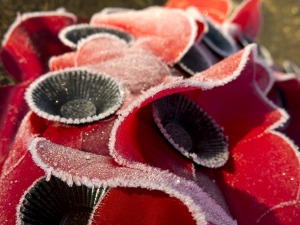 “They shall grow not old, as we that are left grow old:

Age shall not weary them, nor the years condemn.

At the going down of the sun and in the morning

We will remember them.”